skip to main | skip to sidebar

In order to fully understand our physical and nutritional needs, we need to appreciate the impact that our evolutionary past had on the development of our minds and bodies. It has been argued that two great metabolic transformations shaped the development of modern humans. In our early history we were intelligent and adaptive omnivores who exploited opportunities for a variety of food sources by an array of scavenging techniques. Many of our food sources had low nutritional value, and that which was of higher value was scarce and unreliable. The randomness of our nutritional assets led to an energy storage solution that is with us today. Our ability to store energy as fat and our inclination to gorge ourselves on fatty meat are a relic of that period in our development.

Given our foundation in this early metabolic construction, we underwent the first metabolic transformation at the beginning of the last ice age approximately 100,000 years ago. It was then that we transitioned from scavengers, to hunters of large game. Then again another metabolic adaptation occurred about 10,000 years ago with the development of agriculture.

The second metabolic revolution, and arguably the most important revolution in the history of Homo sapiens, was the agricultural revolution beginning about 10,000 years ago in Asia and near the Mediterranean. Agriculture came later to Europe, perhaps only 6,000 or 2,000 years ago. Great Britain was still making its transition to agriculture at the time Caesar’s army entered around 100 BC. The paleo-anthropological evidence shows that with the agricultural revolution there was a decline in stature, cranial capacity, and muscularity, along with a general de-cline in health and nutrition. (How do they know our pre-agricultural ancestors were muscular? The bones are thick and dense and the points where muscles were attached are robust.) This metabolic revolution substituted routinized, repetitive work of grinding intensity and a diet of low variety and protein content for the metabolically varied physical activities of hunting and gathering and the enormous variety of food and high protein content of hunter-gatherer diets. Within a few thousand years much of humanity had come to rely on a few starchy crops for the overwhelming bulk of their calories. The repetitive work of agriculture and grain processing left their mark in the high incidence of arthritis that is found in the skeletons of our agriculturist ancestors.Even today, most of the third world lives on a few starchy crops and they exhibit the damage that a high carbohydrate diet with too little fresh plant and animal foods can inflict. Those people who populate the areas where agriculture began earliest show what is called a Mediterranean physical type characterized, according to Webster, as medium or short stature, slender build and small heads. Third world children, living in rural, agricultural areas, live almost entirely on grains. They rarely eat fresh fruit or vegetables and eat meat even less often. They achieve less stature and test performance than urban children and suffer skeletal and dental deficiencies. It is easy to tell from the skeletons of our ancestors whether they were agriculturists or hunter-gatherers. The agriculturists have bad teeth, bone lesions, small and underdeveloped skeletons and small craniums compared to hunter-gatherers.The important metabolic revolutions to follow agriculture were the industrial and information revolutions. These energy-conserving revolutions lowered the level and variety of the metabolic challenges we face still more. The industrial revolution introduced milling of grains, a major factor in elevating the starch content of grain-based foods with a consequent rise in their insulin-elevating effect on human metabolism. In addition, the mineral and phytochemical content of grain-based foods were dramatically reduced. Our ancestors are us. It was only 10,000 years ago that agriculture changed the human lifeway from hunting and gathering to settled agriculture. And the dramatic decline in human energy expenditure of the industrial age occurred no more than 200 years ago. The information and television age is no more than two decades old. In this brief time span evolution has made few, if any, changes in what we inherited from the prior 3 million years.

Visit http://www.arthurdevany.com/ for more information about Evolutionary Fitness.
Posted by H. sapiens at 5:08 PM No comments: 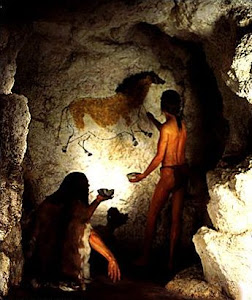